A father brought his young girl into the Ozone Clinic and asked Dr Dulitsky PhD MD (Ru)  if there was anything he could do for his daughter. Dr Dulitsky ran some tests and found that seven-year-old Lily had some bacteria in her blood which was weakening her lower limbs, making it difficult for her to walk.

Lily’s father, Sam, said they didn’t know what to do about Lily’s condition before they came to the Ozone Clinic. Sam said Lily had reached all her milestones up until when she was about six years old and then she deteriorated a little bit. It took a long time to find out what the main issue is, and they’re still debating it.

“We took her to Westmead Children’s Hospital and they weren’t certain about what was wrong. They said it looked like a condition called SMA but they weren’t 100% sure. They did a number of tests, and the doctors said there was an issue with the muscle nerve function in the legs compared to the upper body,” Sam says.

“So, we tried a number of treatments but there didn’t seem to be any improvement,” Sam adds.

After no luck with traditional medicine, they looked for something else

Sam and his wife, Shona, felt it was urgent for them to find out more when Lily started to have a lot of trouble walking and she couldn’t manage to walk on her own. So, when a friend of Sam’s told him about this wonderful new treatment called ozone which helps a lot of different types of conditions, he was extremely interested: “So, I looked it up on the Internet and I found this wonderful place – the Ozone Clinic,” Sam says.

“And so, we started with a number of different treatments for Lily here and we could see the improvement very early – which is amazing and which is great,” said Sam.

They started taking Lily to the clinic late last year and after a few months treatment, she’s much improved and she can now walk by herself, using a walker as an aid.

Sam says before they came to the Ozone Clinic, Lily had a great deal of lower limb weakness and it really affected her legs badly. As he says: “She also had fatigue and she couldn’t stand up properly. But now, after the treatments, she still walks with a walker but she’s got a lot more strength now.”

“We were coming out three times a week at the beginning of her treatment and now she’s on some extra medications from Dr Dulitsky – as well as the treatments – and we come out twice a week now,” he added.

Lily can even walk a little bit by herself now and she’s been able to continue to go to school: “Yes, she goes to normal school. She’s in year three now,” says Sam.

Her father adds that he’s been watching her closely and he’s seen how she benefits from the treatments each week – plus the medications she takes at home from the clinic have made a difference as well. These medications for Lily include probiotics and natural anti-inflammatories to help her calm down the bacterial inflammation.

Lily has also had some live blood analysis tests done and Sam says: “Yes, we can see a lot of improvement in the blood tests.”

When asked what would he say to other parents who are grappling with a situation where their child is sick and they can’t work out what it is, he says:

“To be honest, all it took was just one consultation for us. We did a full blood test and it came back a few weeks later because it gets sent overseas. And when it came back, Dr Dulitsky explained everything. I was quite amazed at how much information we could get with these tests.” 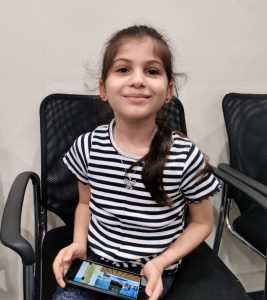 Extremely happy with the results

Sam and Shona are both extremely happy with the results of the treatments Lily has had at the Ozone Clinic. Sam adds: “They know what they’re talking about here. So, we’re very, very, very happy. To be honest, we’re lucky to have this clinic here, yeah. To be honest, I thought about taking her overseas but then when all the COVID hit, I had to find out what we could do here and I found this place.”

Sam agreed that because the treatment seems to work best on a cumulative, steady basis this makes going overseas a difficult option. As he says: “You can’t keep going back. You can’t go back and forth, so this makes it very difficult. It’s better to be doing these treatments here.”

Cognitively, Lily was always “extremely bright” so Sam and Shona weren’t worried about her mental abilities: “It only affects her lower limbs. She’s talking and she’s happy. It never affected any of her muscles or anything above the waist, which has been good,” Sam says.

Sam and Shona are extremely happy they’ve found the Ozone Clinic and that Lily has improved so much already. While he has spent a lot of time bringing Lily to the clinic, Sam’s quick to say he’s not too concerned about this: “It’s worth it. It’s worth it because I think at this age, it’s just so important that your children are well and happy. You can see from Lily – she is a very happy girl.”

The tests and treatments Lily has had are all available at The Ozone Clinic in Castle Hill, Sydney. For more information on these treatments take a look here.

Madonna Used to Wake up Feeling Exhausted Every Morning