The effectiveness of ozone therapy in chronic osteomyelitis: A randomised controlled clinical trial 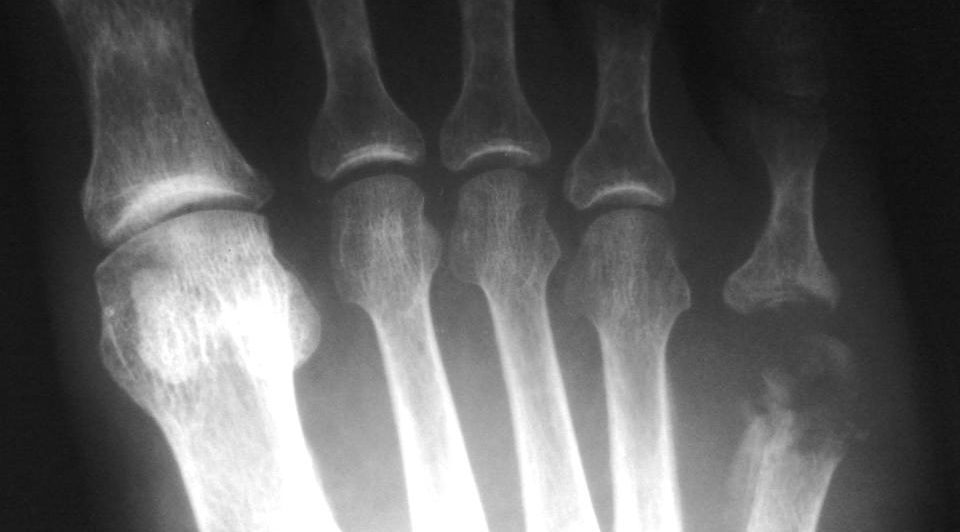 “Treatment of chronic osteomyelitis is complex and includes long-term management with antibiotics and debridement. Inadequate blood supply, underlying diseases, and deep involvement of the infected area can cause classic treatments to fail and lead to serious complications, such as limb amputation. Recently, there has been increasing interest in the use of ozone therapy for infectious diseases.”(1)

“This study was designed to investigate the beneficial effects of ozone therapy on chronic osteomyelitis.” (1)

“Sixty patients with chronic osteomyelitis were divided into two homogenized groups: ozone therapy and control. Ozone therapy at a concentration of 30 mg/mL was performed daily by ozone bagging, minor autohemotherapy, and ozone saline injection into the bone. Data were analyzed to determine recovery and erythrocyte sedimentation rates.” (1)

“These findings indicate that ozone therapy, as a promising complementary treatment, can be applied in chronic osteomyelitis management.” (1)

Osteomyelitis is a bone infection, which can involve different structures, such as the bone marrow, cortex, periosteum, and soft tissues surrounding the bones. The disease causes inflammation, necrosis, and new bone formation and can develop into a chronic or stable stage. Reduction in the blood supply can lead to ischemia and necrosis in the event of osteomyelitis and inhibit antibiotic release into the affected area (2).

Due to its high incidence and continuous emergence, osteomyelitis presents significant challenges for modern medicine. This condition is classified into acute, subacute, and chronic stages. Chronic osteomyelitis refers to a long-standing bone infection (3) and is most commonly reported in male adults following trauma or injury (e.g., surgery). It is described as a persistent infection of bones, a painful condition with movement restrictions of the affected limb (4). Untreated chronic osteomyelitis can cause avascular necrosis and formation of osteocyte islands without vessels, containing infection (sequestration). Patients with chronic osteomyelitis may face infection, frequent periods of local pain, and drainage of infected tissues through sinus ducts. Some patients may even suffer from chronic osteomyelitis for decades (2, 5).

In recent years, ozone has been used in different fields of medicine, including orthopedics, neurology, internal medicine, and sports medicine (6). In orthopedics, ozone is used in the treatment of lumbar disc rupture, infections caused by necrosis and compartment syndrome, and osteomyelitis (7, 8). In the past three decades, millions of people have benefited from the therapeutic properties of ozone, while no complications of acute and chronic toxicity have been observed. Ozone appears to have positive effects on the treatment of infections, especially abscesses and sites antibiotics cannot influence (9, 10). However, effectiveness of this intervention, as an adjuvant treatment for chronic osteomyelitis, has not been studied adequately, and further investigations are required.

This randomized clinical trial was performed on 60 eligible patients with lower-extremity osteomyelitis, who had been referred to Poursina hospital, affiliated to Guilan University of Medical Sciences (GUMS) during December 2013 – June 2014. Before recruitment of the first participant, the study protocol was approved by the local ethics committee of GUMS and registered in the Iranian registry of clinical trials (ID, IRCT201306276186N2). This study was performed in accordance with the current ethical standards of the declaration of Helsinki. All patients signed an informed consent form prior to the study following a complete description of treatment methods.

All patients, aged 16 – 70 years, with chronic postoperative lower-extremity osteomyelitis and bone culture indicating Staphylococcus aureus as the true and pure pathogen of bone infection, were recruited.

The exclusion criteria were as follows: 1, unwillingness to participate in the study; 2, history of psychological diseases; 3, preexisting allergies especially to ozone; 4, history of alcohol or drug abuse; 5, history of hemorrhagic infarcts; 6, active hemorrhage of any organ; 7, use of anticoagulation agents; 8, pregnancy; 9, glucose-6-phosphate dehydrogenase deficiency (favism), hyperthyroidism, or severe anemia; and 10, resistance to vancomycin based on the antibiogram.

Sixty eligible patients were randomly allocated to either ozone (O) or control (C) group, using randomized fixed quadrant blocks. The subjects had an equal probability of being assigned to each of the two groups. Considering the type of procedure, blinding the patients was not executable; in fact, it was unaccepted from an ethical perspective. Therefore, the subjects were informed about their groups. However, the investigator who visited them and recorded the data remained blinded; accordingly, a single-blind trial was planned.

6. Preparation of Samples and Treatment

The groups were matched in terms of age, gender, underlying diseases, and bacterial strains. At the beginning of the study, plain lateral and apical radiographs were acquired, and the osteomyelitis criteria (i.e., sequestrum, periosteal reaction, reactive bone formation, and ground-glass appearance) were evaluated in each patient. In the control group, patients were treated with intravenous vancomycin (trade name, Vancocin; Jaber Ebne Hayyan Pharmaceutical company) at 15 mg/kg q12h for two months, while in the ozone group, the patients received ozone therapy in addition to antibiotics.

Ozone was generated by an ozone generator (Bruchsal®, Humazone Herrmann, Germany) at concentrations of 5 – 80 mg/mL at a flow rate of 1 liter per minute. Ozone therapy was performed at a concentration of 30 mg/mL in three different ways, including ozone bagging, autohemotherapy, and intraosseous injection and washing the area with an ozonized saline solution.

Ozone bagging: The patients were treated with bag therapy under slightly hyperbaric conditions for 20 minutes. The limb was surrounded by a plastic bag. Then, ozone gas was injected into the bag using a nelaton catheter. This method was used daily until the closure of fistula.

Autohemotherapy: For each patient, 40 cc of venal blood was drawn into a 60-cc heparinized syringe. Then, 20 cc of ozone gas was added. Syringe rolling was performed for three minutes until blood was mixed with ozone. Following that, the ozonized blood was administered intravenously every other day in four sessions.

Intraosseous injection and washing the area with an ozonized saline solution: In this method, 500 cc of normal saline was mixed with ozone for 20 minutes and then injected into the bone through the fistula. Eradication and washing were performed in the involved area. This method was repeated daily for the first three days and then performed every other day for 10 sessions.

All patients were followed-up for six months. The radiographs were repeated in postoperative visits and compared with the initial radiographs. The patients were evaluated in terms of recovery time and incidence of complications, such as ankylosis of joints, bony fusion (complete loss of articular surface), and bone destruction (frequent bone fading on radiography). Recovery was defined as disappearance of clinical symptoms (localized erythema, pain, heat, edema, and purulent discharge) at the wound site, along with erythrocyte sedimentation rate (ESR) reduction, negative culture, and retained limb function. Debridement was performed by one surgeon using a similar procedure at a specific time interval.

Statistical analysis was performed using SPSS version 19 (SPSS Inc, Chicago, IL, USA). Data are expressed as mean and standard deviation. Chi square test was used to compare categorical variables between the groups. Kolmogorov–Smirnov test was also applied to determine the normal distribution of variables, followed by parametric tests. Independent t test was applied to compare and assess parametric data between the groups. The level of significance was set at P < 0.05, and the tests were performed bilaterally. 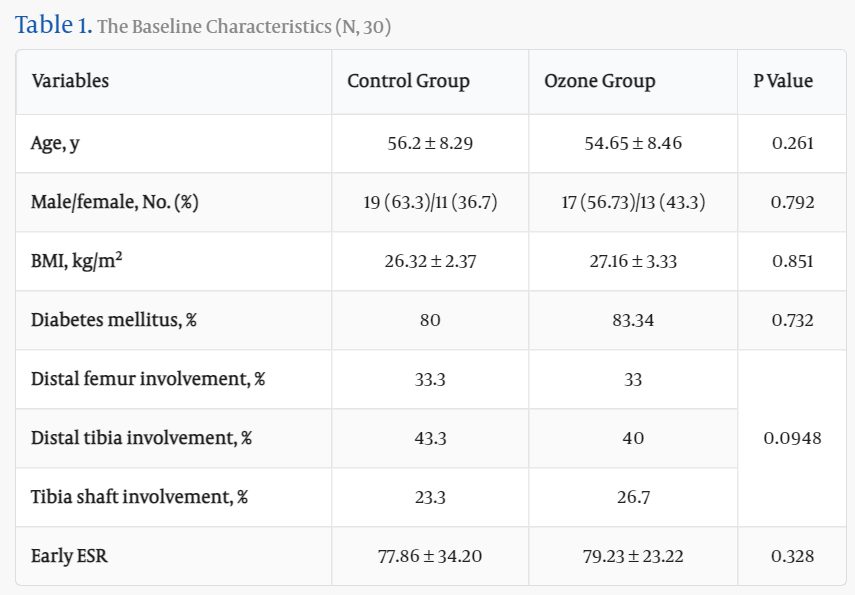 The results of the present study showed that ozone therapy might be a promising strategy for patients with chronic osteomyelitis. This strategy was well-tolerated by our patients, who showed no serious side-effects. Obviously, before its application as a treatment protocol, future large-scale, well-planned, multicenter, prospective trials should address this issue with functional endpoints.