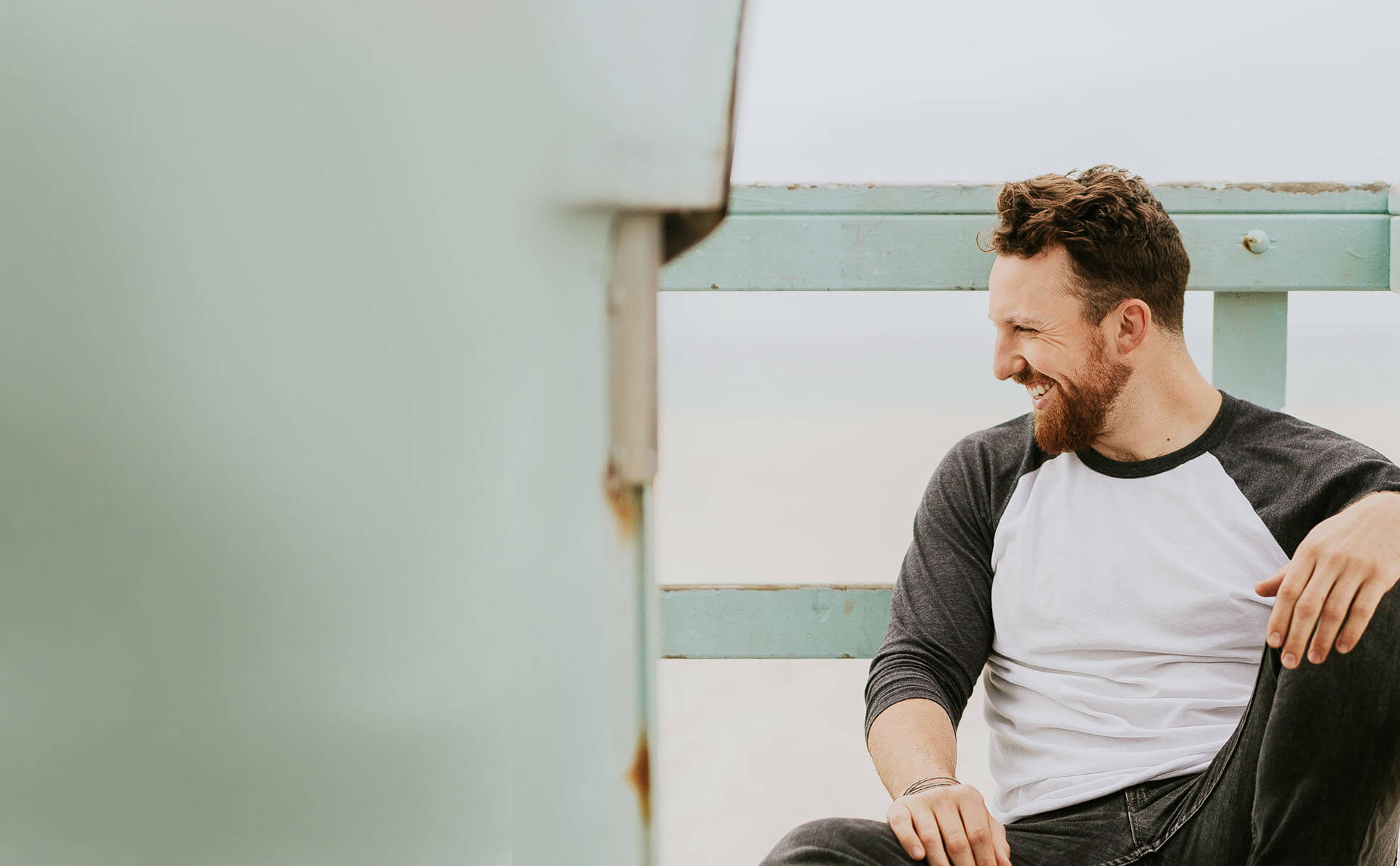 Diabetic foot ulcers (DFU) are a burden to the diabetic community. With increasing medical bills, to unsuccessful treatment, those suffering from DFUs can use alternative therapeutics like ozone therapy to find relief. With the help of pharmaceutical science, various O3 treatments have flourished in the medical community to help those suffering from DFUs. Promising results are seen through numerous studies.

Usually, a mixture of both O2 and O3 is seen in pressurized machines when administered to the foot ulcer. Foot ulcers, specifically DFUs, need to be assessed, cleaned, and treated as fast as possible for the fastest results. Results such as amputation can be seen if the foot is not attended to as soon as possible. With fast growing clinical trials in O3 therapy and quick administration of the O3, O3 therapy may be on the rise to be at the forefront of treating DFUs.

A broad summation of diabetic foot ulcers: they are a big issue, having an incidence of 4-10{e43154ce913794517af217fcab284b44cfe906ba9a1c4ba2ecde5a9be0395ec5} in patients diagnosed with diabetes mellitus and a lifetime incidence of around 25{e43154ce913794517af217fcab284b44cfe906ba9a1c4ba2ecde5a9be0395ec5}. Recurring infections in patients suffering from type 2 diabetes coupled with high plantar pressure are major determining factors of diabetic foot ulcers. Despite ozone’s inherently unstable nature, research shows that ozone treatment might be able to treat DFU patients and that the possibility this treatment will lead to positive health outcomes will be talked about throughout the article. The group example of diabetic rats undergoing this treatment showed sufficient improvement in both the rats’ glycaemic index and oxidative stress levels.

There are three main ways of classifying diabetic foot ulcers; categorising them by assessment of severity. The oldest and most common way is through the 1970s, Meggit-Wagner classification system (Table 1). This system is generally considered too simple by numerous researchers, believed to lack overall substance by not describing the ischemia and possible DFU complications.

Further, by the early 1990s, the University of Texas (Table 2) created a more complex classification system to improve Meggit-Wagner’s order. However, this system was deemed and considered too complicated for conventional and medical use.

Although both classification systems are used today, Amit Jain proposed a new classification to further improve matters by basing it on infective and non-infective complications (Table 3).

Patients with DFU are at risk of developing Peripheral Arterial Disease (PAD). Additionally, 50{e43154ce913794517af217fcab284b44cfe906ba9a1c4ba2ecde5a9be0395ec5} of patients with DFU have peripheral arterial disease. Common physical examinations for diabetic patients with foot ulcers is the use of ankle brachial pressure- systolic (ABI-s). The use of the ABI-s test is to understand how severe PAD has advanced in patients with DFUs. However, diabetic patients tend to have calcified (hardened) lower limb arteries, disrupting the systolic pressure in the arteries after the contraction of the heart. ABI-s can be falsely elevated due to the calcification of lower limb arteries.

A study shows that Ankle brachial pressure- diastole (ABI-d) can be performed instead of ABI-s. Asbeutah et al (22) had a size of 51 patients present with diabetic foot ulcers. 26 of which came present with classified lower limb arteries and 25 of which did not present calcification. Another 25 individuals were used as a control. Simply enough, both ABI-s and ABI-d were measured bilaterally via a brachial and ankle oscillometric pressure. The use of analysis of variance (ANOVA) showed statistical significance among people with the use of ABI-s and ABI-d leading to the conclusion that ABI-d may be a better tool for patients with DFUs and calcified arteries.

Some researchers believe that ABI testing is not as effective as others such as continuous wave Doppler (CWD) or toe-brachial Index (TBI). The most specific and sensitive in determining the presence of PAD in diabetic patience is the continuous wave Doppler (CWD). CWD has proved to be more specific and sensitive than TBI or ABI which were ruled out due to a study of their limitations.

Studies have demonstrated that ozonated water, along with ozonated oils, can be used as disinfectant and healing stimulants to promote better health outcomes (1). This can reap great benefit for individuals suffering from DFUs. Additionally, O2–O3 treatment can improve vascular endothelial growth factor (VEGF), transforming growth factor-β (TGF-β), and platelet-derived growth factor (PDGF) levels affecting foot ulcers. These growth elements, TGF-β in particular, seem to increase in patients with DFUs and can heal the localized gangrene and encourage tissue remodeling.(2),(3),(4)

(7) “O3 causes platelets to aggregate, along with the release of the specific growth factors (e.g., PDGF, TGF-β, and IL-8) which is known to heal wounds rapidly.(2) Furthermore, O3, when applied to DFUs, eliminates pathogens and the O2 promotes proliferation of fibroblasts. This helps rebuild the intercellular matrix, healing the area around the DFU.(4) Bulynin et al.(5) demonstrated that O3 has antibacterial properties and developed a new method for treatment via hydropressive treatment of wounds. A stream of ozonized fluids is generated under a pressure of 350 ATM and an “OZh-2” apparatus is used. The wound is cleansed rapidly, reduces chance of infection, and period of treatment.(5) One study showed that the use of hyperbaric oxygen therapy can ameliorate dermal wound healing.(6) Travagli et al.(4) believe that the accelerated trend of wound closure in a young population may be due to O2 tension by O3 in the surrounding wound area that acts as an antibacterial substance to decrease bacterial infection.” 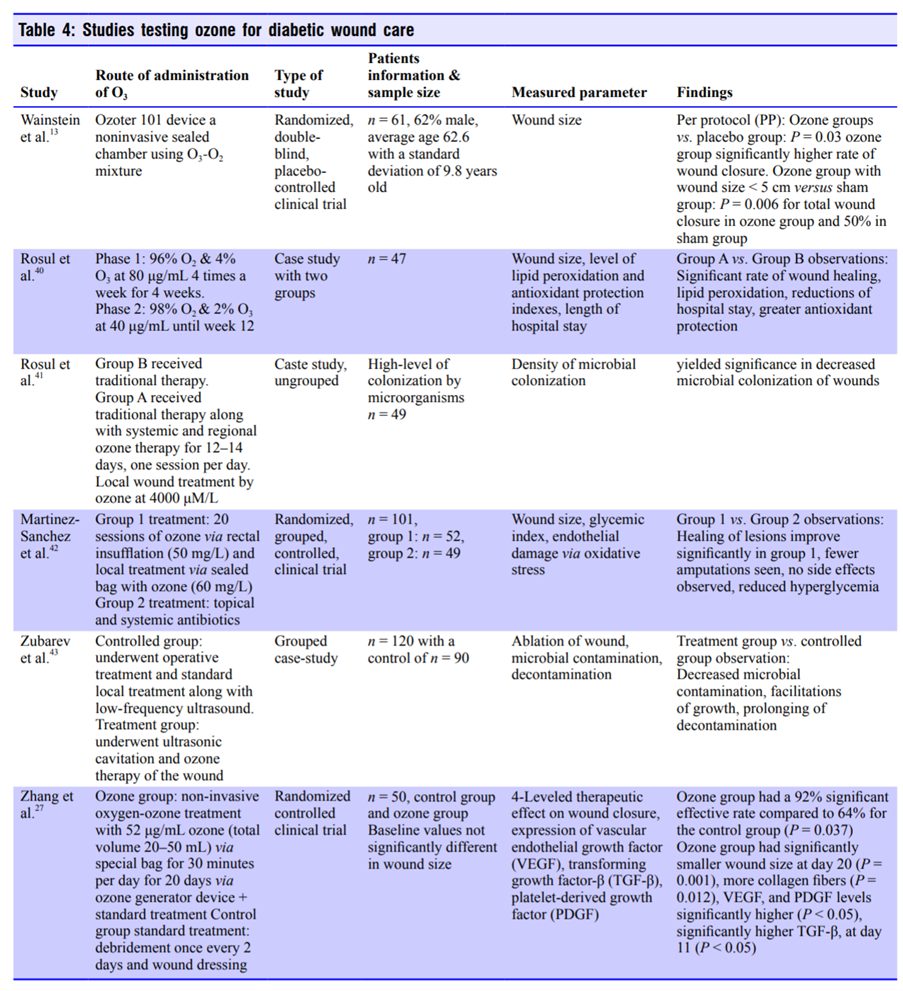 A team of German scientists of the late 20th century experimented with O3 on diabetic skin ulcers to examine the outcomes. (7) “They used a polythene-bag for 25 minutes on average with a concentration ranging from 10 to 80 μg/mL. The different concentrations aforementioned were used with how severe the ulcers were. As the patients’ ulcers healed, a lower concentration of O3 was used.(8) Záhumenský et al.(9),(10) stated that offloading and debridement of the area around the DFU is a key step in beginning therapy for neuropathic ulceration. Furthermore, the healing process can be accelerated by O3, however, one should wear proper footwear to alleviate unnecessary pressure to the foot.”  In non-healing wounds, a combination of O2-O3therapy might be of benefit to healing. A study showed that the mixture can heal and reduce the pain due to the inherent disinfectant properties and scavenging properties of endogenous oxygen reactive molecules; free radicals.  O2-O3  is recognised as a disinfectant because it is known to denature bacteria by destroying their cellular membrane by reacting (oxidation) specific proteins and lipids . This explains why infections make minimal appearances during ozone therapy for DFUs. In fact, a few studies have shown that O3therapy can be applied to patients with orthopaedic injury after initial, conventional treatment.

The fundamental safety of intralesional O3 injection in the treatment of chronic morbidity  (diabetic foot ulcers) is yet to be reliably assessed (11). Though ozone therapy is typically safe without adverse reactions, it may be toxic if administered outside its therapeutic window. Due to the intralesional O3injection not yet being used in any studies involving DFUs, its safety is uncertain. Thus, these injections may inadvertently drive the superficial skin infection into deeper tissue. Therefore, O3 therapy should not make its way to deep, heavily infected or neurotic wounds.

An example case would be Uzun et al (11). He described a diabetic patient who developed severe foot necrosis and infection after receiving intralesional O3 injections for a non-healing wound. Major complications that have linked to O3 injections for lumbar disc herniation. These include: vitreo-retinal haemorrhages, ventral and dorsal root injury, vertebrobasilar stroke, pyogenic discitis, ventral epidural abscess, fulminant septicaemia and death. Skin irritation may follow topical application of O3 while respiratory irritation may occur due to gas emitted from the generator. In O2– O3 therapy via autohemotransfusion for psoriasis, Marchetti et al (12) (52) described a fatal gas embolism (clot). Additionally, when tested in pregnant rats, teratogenic or embryotoxic effects ( i.e. foetal abnormalities) of O3 administered via rectal insufflation have not been identified. To conclude, proving the innocuity of O3, requires more controlled clinical trials.

Individuals should take regular measures to prevent DFUs. An annual DF screening and care intervention are examples which high risk patients should pursue particularly. Another measure, limited to individuals who have experienced ulceration, is nerve decompression surgery.

It can help to further prevent ulceration along with potential amputation. Peripheral arterial disease (PAD) is a major complication of DF and can determine the prognosis of healing.  According to the Eurodiale study group, a neuropathic ulcer shift to neuroischemic ulcer is quite common. Assessing PAD via imaging and revascularisation can dramatically reduce health risks if treated timely and appropriately. “Diabetic neuropathic ulcers can be managed by removing calluses, controlling infection, and reducing the amount of weight placed on the afflicted foot. Many physicians agree that one of the greatest ways to decrease rates of mortality and morbidity among those who suffer from DF complications is early recognition.”(7)